The Indian two-wheeler industry, which is finally seeing a return to demand, albeit significantly lower than in the pre-Covid FY2019 period, also owes its growth to the scooter market. Of the total sales of 66.63.265 units (an increase of 33%) in the period April-August 2022, scooters account for 33% or 21.91.208 units (an increase of 53%). A year ago, the scooter share was 28.5%, which translates into an increase of 4.5 percentage points.

A closer look at the SIAM wholesale numbers for nine scooter manufacturers in the first five months of fiscal 2023 reveals some interesting facts. Out of the top four OEMs with six-figure totals, TVS Motor Co posted strong growth of 89% year-on-year, followed by market leader Honda Motorcycle & Scooter India at 53% year-on-year and Suzuki at 13%. In terms of market share, TVS also achieved maximum profits: almost 4.5 percentage points up to 23.88% from 19.40% a year ago. 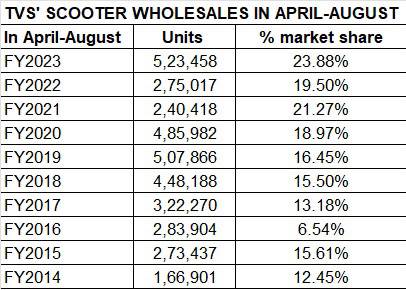 While TVS’s flagship Jupiter, available in 110cc and 125cc versions, remains the engine of growth, the cool NTorq, which was launched in February 2018, has also given the company new impetus in the scooter market, and in the last few years, the TVS introduces a number of variants. On September 12, TVS introduced a marine blue color to the 125cc NTorq Race Edition. IQube, the only TVS electric scooter, is also gradually delivering the goods.

ALSO READ TVS iQube and Bajaj Chetak are riding the wave of rising demand for electric vehicles in April-August 2022.

Christmas is fast approaching, so you don’t have time to buy gifts – not only for your loved ones, but also for yourself! There’s no shortage of deals to choose from from a variety of Read more…

How to choose the best? We compare them on every front to make your decision easier | E Soft News