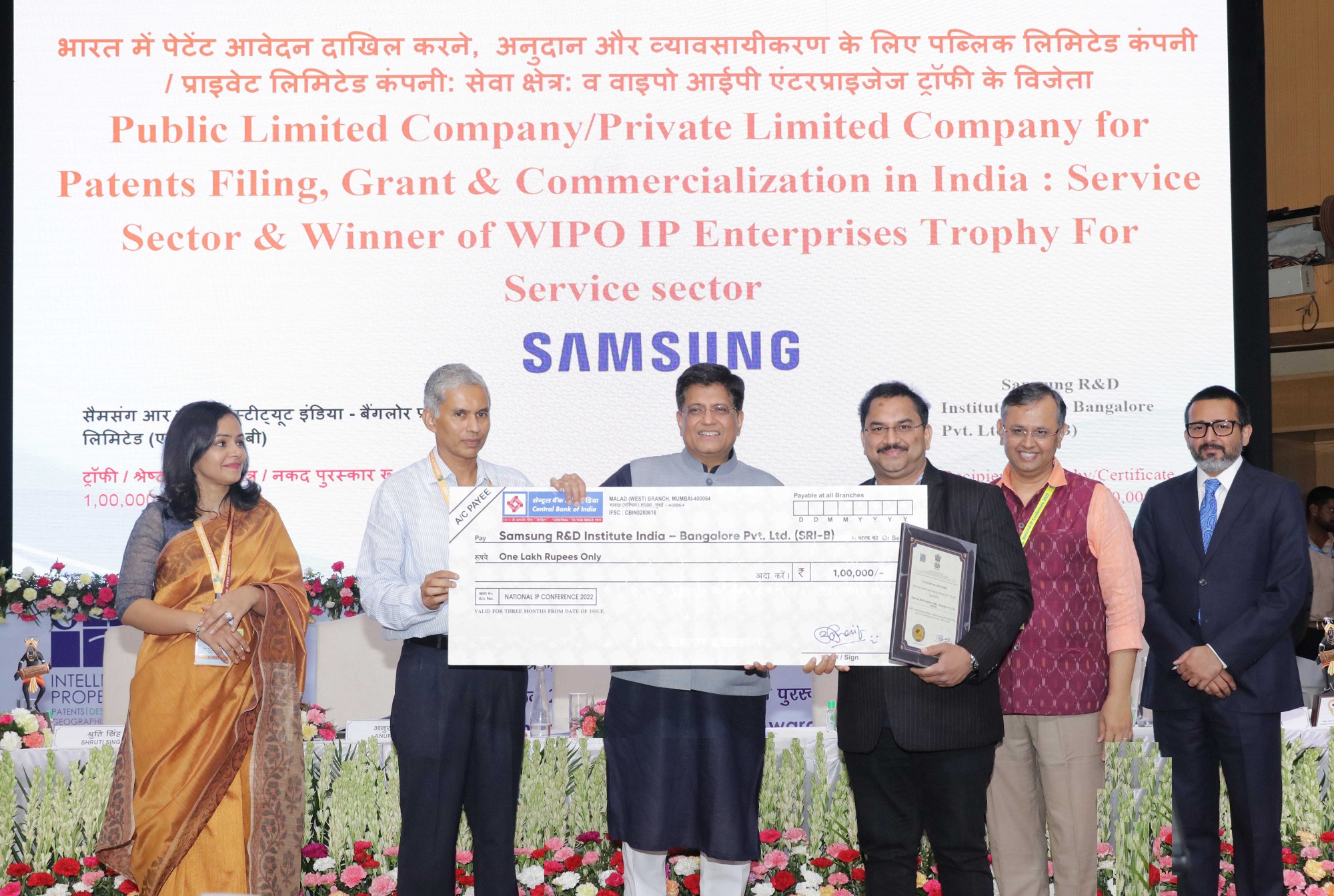 Samsung R&D Institute – Bangalore (SRI-B), Samsung’s largest R&D center outside of Korea, has been awarded the Best Public Limited Company/Private in terms of patents by the Government of India with the National Intellectual Property Award 2021 and 2022 was awarded in the nomination of a limited company. Grant and Commercialization in India: Services Sector.

The award was presented to SRI-B by Mr. Piyush Goyal, Minister of Commerce and Industry, Consumer Affairs, Food and Public Distribution and Textiles, Government of India at a ceremony in New Delhi.

“We at Samsung are honored to receive this prestigious award from the Government of India. This is a recognition of our efforts to update the standards in the field of patents and innovation, as well as to create a strong patenting culture in our organization in the fields of Communication Protocols, Visual Intelligence Solutions, AI/ML, Internet of Things. Data Intelligence and Services. “Samsung’s mission is to inspire the world by creating innovations, technologies, products and designs that enrich people’s lives.” said Mohan Rao Goli, Chief Technology Officer, SRI-B.

The Department of Industrial Policy and Promotion (DIPP), Ministry of Commerce and Industry, Government of India annually presents the National Intellectual Property Awards to distinguished innovators, organizations and companies in the fields of patents, designs and trademarks.

The National Intellectual Property (IP) Awards are given annually to honor and reward top achievers, including individuals, institutions, organizations and enterprises, who have contributed to strengthening the IP ecosystem in the country, for their IP creation and commercialization. creativity and innovation.

So far, SRI-B has filed more than 7,500 patents in India and worldwide. SRI-B engineers have filed patents in areas such as multi-camera solutions, 5G, 6G and ultra-wideband wireless communication protocols. These patents have been commercialized in Samsung’s flagship Galaxy smartphones, smartwatches and networking equipment, among others.

Over the past few years, SRI-B has embarked on a path to becoming a patent powerhouse by improving the quality of innovation and fostering a patent mindset among its engineers. In recent years, many young inventors appeared for the first time at SRI-B.

Today, approximately 50% of patent filers in SRI-B are first-time inventors and approximately 27% have less than 5 years of experience. With this strong patenting culture, SRI-B has seen a 100% increase in annual patent filings over the past four years, commercialization of patents filed by Samsung has quadrupled over the past 3 years, i.e. these innovations will eventually be offered at Samsung. products. Most of the patents filed are related to emerging fields such as 5G, AI, ML, IoT, camera and vision technologies.

SRI-B has a specialized intellectual property team that provides training on invention creation and advanced invention stage training to help employees understand the idea and process of innovation. Most of the patents were filed by young millennials and Gen Z, who are just entering the workforce.

To streamline the process for inventors, SRI-B has also set up an internal portal. This portal is a one-stop shop for all the patent information an engineer requires throughout the process.

To strengthen the Industry-Academia link, Samsung R&D is working with young innovators from top engineering colleges as part of the popular student engagement program Samsung PRISM.

Samsung PRISM was launched in 2020 and over the past two years, over 4,500 engineering students and over 1,000 professors have successfully delivered live projects with SRI-B engineers. During this time, teams of students and professors, along with SRI-B engineers, filed several patents and published several research papers in cutting-edge areas such as Artificial Intelligence, Machine Learning and IoT, reinforcing Samsung’s vision of Powering Digital India.

SRI-B is currently expanding this program to 70 engineering colleges in India by 2025 with an aim to stimulate India’s innovation ecosystem and make students industry-ready.