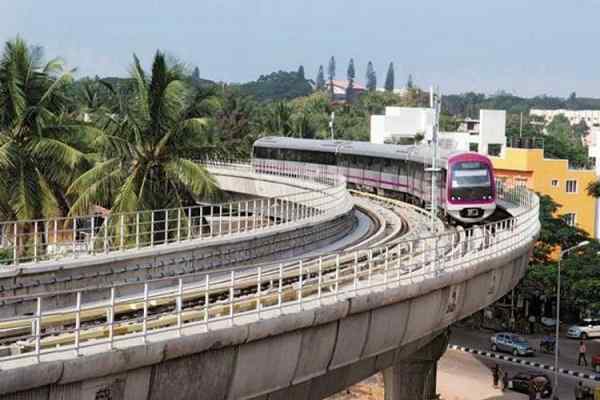 The first test run of a six-coach train between Whitefield depot and Pattandur Agrahara (ITPL) station was successfully conducted. The commencement of the trial run of the metro is of great significance as this 3.5 km stretch comprising four stations forms part of the Baiyappanahalli-Whitefield line of Phase II of the Bangalore Metro.

“We started the test at 12.20 pm from Whitefield depot and finished at 1.40 pm, running at a speed of 15 km per hour. It has been a smooth ride, the track is well done and we have no issues,” BMRCL Managing Director Anjum Parvez said on the debut tour with Rolling Stock, Electrical & Operations & Maintenance Director NM Dhok and Jitendra Jha after being Project Manager, Motion Picture.

“The complete train was dragged on a big trailer for 100 meters from the starting point of the depot as the third rail (750V power line) is a bit far for safety reasons. The train headed uphill from the depot towards Whitefield station. We crossed Channasandra and Kadugodi stations, stopped at ITPL,” Parvez added.

NM Dhok said the trials will resume after Deepavali. “Once the tests are completed, an independent inspection will be carried out to ensure safety and signaling. After that the Commissioner for Metro Railway Safety (CMRS) will be invited,” he said.

Parvez said the trials will gradually touch Garudacharpalya and will be completed by February 2023, after which the CMRS processes will be implemented. “Then we will discuss with the government and whether we can commission only this section or we will commission the entire line. Meanwhile, work will be done on the pending section from KR Puram to Baiyappanahalli,” he said.